Ischemia-reperfusion injury (IRI) after a heart transplant involves a sequence of inflammatory processes. The pathogenesis of IRI is characterized by the up-regulation of cytokines and growth factors, as well as microvascular barrier dysfunction and perfusion defects. This cascade of events may lead to enhanced allorecognition and concomitant activation of the adaptive immune system, leading to cardiac fibrosis and cardiac allograft vasculopathy and, ultimately, heart transplant failure. Current phar­macologic therapies target T cell-dependent allo­immune activation in the recipient; however, no specific treatment is available against IRI.1-4

Studies of VEGF-B have resulted in contradictory data.18 The endogenously produced factor appears to be functionally inert under normal conditions. Gain-of-function experiments with transgenic mice, however, have suggested that VEGF-B may regulate the survival of vascular cells and cardiomyocytes through regulation of anti-apoptotic signals and possibly via cellular energy metabolism.19 Vascular endothelial growth factor-B knockout decreases blood vessel survival in an oxygen-induced blood vessel regression model of mouse corneal pockets and is indispensable for endothelial cell, pericyte, and smooth muscle cell survival in vitro.20

This is the first study to investigate the effects of transgenic VEGF-B overexpression in cardiac al­lografts. We measured VEGF-B mRNA in native hearts and rat cardiac allografts during prolonged cold ischemic preservation and IRI of heart transplants. In addition, we used transgenic donor hearts overexpressing VEGF-B under the control of an α-myosin heavy chain promoter (α-MHC) or donor hearts transducted with adeno-associated virus 9 (AAV9)-carrying a VEGF-B transgene and investigated whether overexpression of recombinant human VEGF-B could affect micro­vascular dysfunction and myo­cardial cell death, the hallmarks of cardiac allograft IRI.1-4,21

Permission for animal experiments
Permission for animal experiments was obtained from the State Provincial Office of Southern Finland. The animals received care in compliance with the “Guide for the Care and Use of Laboratory Animals” prepared by the National Academy of Sciences and published by the National Academies Press (ISBN 0-309-15400-6, revised 2011).

Laser Doppler monitoring
Cardiac allograft tissue perfusion was analyzed 1 minute, 5 minutes, and 6 hours after reperfusion by dynamic measurement with a laser Doppler monitor, Transonic BLF21-Series (Transonic Systems Inc., Ithaca, NY). The moving Doppler effect was calculated via an 18-gauge (1.2 mm) probe head receiving fiberoptic light reflected by stationary structures within the tissue as well as by moving particles (red blood cells). A low-intensity beam of monochromatic light was emitted to a 1-mm depth of a portion of the apical myocardium, and the tissue volume under the laser Doppler monitoring was ap­proximately 1 mm3. Flow signal was sampled as 200 s-1 from transmitted 19200 baud (pulses per second) and is presented as tissue perfusion units (TPUs) that are relatively proportional to mL/min/100 g of tissue.22

In situ apoptosis detection
The analysis of cardiomyocyte apoptosis was based on nick-end labeling assay (TUNEL). Parafor­maldehyde-fixed paraffin sections (4-μm thick) were stained with an in situ apoptosis detection kit (TA5353, CardioTACS, R&D Systems, Minneapolis, MN). TUNEL-positive apoptotic cardiomyocyte nuclei were counted from 4 random fields of each quadrant of a cardiac cross section with ×40 mag­nification, and the results are given as the mean number of positive cells per 1 mm2.

Quantitative real-time PCR
Quantitative real-time PCR reactions were carried out on a RotorGene-6000 (Corbett Research, Hilden, Germany) using 2X DyNAmo Flash SYBR Green Master mix (Finnzymes, Espoo, Finland). Measure­ment of the PCR product was performed at the end of each extension period. Amplification specificity was checked using melting curve analysis. The number of mRNA copies of each gene of interest was calculated from a corresponding standard curve using the RotorGene software (Qiagen). The results are given in relation to 18S rRNA molecule numbers (see Table 1 for GenBank numbers).

Statistical analyses
All data are means ± standard error and were analyzed using SPSS software version 15.0 (SPSS Inc, Chicago, IL). For parametric comparison of the 2 groups, the t test was applied. The Mann-Whitney U test was used for nonparametric measurements. Comparisons between multiple groups were performed using the one-way analysis of variance (ANOVA) with Dunnett post hoc test. For comparison in longitudinal studies, data were analyzed by combined Kruskal-Wallis and Friedman tests (2-way nonparametric ANOVA). P < .05 was considered statistically significant.

To simulate time frames relevant to clinical heart transplant procedures, we chose 2-hour cold pre­servation and 1-hour warm ischemia time to investigate the effects of cold ischemic preservation, warm ischemia, and IRI on the mRNA expression of VEGF-B in the heart.

Cardiomyocyte-specific human vascular endo­thelial growth factor-B overexpression leads to cardiomyocyte hypertrophy
Real-time PCR revealed that human VEGF-B mRNA was significantly increased in the VEGF-B transgenic hearts (P < .001; Figure 2A). Correspondent runs on cDNA from wild-type animals did not result in any amplification (Figure 2B), and immunofluorescence staining of cardiac allograft cross-sections confirmed human VEGF-B protein localization in cardio­myocytes.
Vascular endothelial growth factor-B has been associated with fatty acid trafficking and metabolism in tissues.6,7,23-25 Therefore, we characterized the effects of cardiomyocyte-specific human VEGF-B transgene expression on the morphology and fat content of the heart, by determining cardiac dimensions and the amount of intracellular neutral fat deposits. In this set of VEGF-B transgenic hearts, there was no significant difference in the total cardiac cross-sectional area or thickness of the right ventricular wall, left ventricular wall, or the septum (Figure 2C-D); however, cardiomyocyte size was significantly larger in the VEGF-B transgenic hearts than in the wild-type hearts (P < .05, Figure 2E). We found no difference in the amount of neutral lipid accumulation between the transgenic and wild-type hearts (Figure 2F), and the amount of fibrosis was similar between the groups (Figure 2G).

Recombinant human vascular endothelial growth factor-B transgenic donor hearts undergo enhanced ischemia-reperfusion injury after transplant
We compared the effect of IRI on VEGF-B transgenic and wild-type cardiac grafts by applying 2-hour cold preservation and 1-hour warm ischemia before reperfusion. Six hours after reperfusion, the rats transplanted with the human VEGF-B transgenic grafts had a greater than 2-fold increase in serum levels of cardiac troponin T compared with rats that received wild-type heart transplants (P < .01; Figure 3A). There was no difference in the number of ED-1-positive macrophages, MPO-positive neutrophils, and CD4-positive and CD8-positive T cells in the heart transplants between the 2 groups (Figure 3B, Figure 4). The proapoptotic Bax-to-Bcl-2 mRNA ratio and number of TUNEL-positive apoptotic cells were similar between the VEGF-B overexpressing hearts and wild-type control hearts (Figure 3C-D). We observed no effects of transgenic human VEGF-B overexpression on inflammatory cytokines and chemokines (Figure 3E).

We observed a relation between ischemia, reperfusion, and VEGF-B production in cardiac allografts. The VEGF-B gene expression was significantly increased in hearts subjected to cold ischemia alone, with no further effect with 1 hour of warm ischemia. Furthermore, 2 hours of preoperative cold ischemia increased the VEGF-B mRNA in transplanted hearts at 6 hours after reperfusion.

Transgenic overexpression of VEGF-B induces cardiomyocyte hypertrophy but also reduces ischemia-induced cardiomyocyte damage in infarct models.11,19 In our study, VEGF-B transgenic hearts were not protected against IRI but rather released more cardiac troponin T to the circulation after ischemia and reperfusion of the cardiac grafts. However, we found no differences in markers of cardiomyocyte apoptosis or graft inflammatory response between the groups. These results are surprising, as other studies have shown that VEGF-B treatment directly decreases the expression of apoptosis-inducing genes, particularly members of the BH3 protein family, both in vitro and in pathologic conditions in vivo.10-17,27

Vascular endothelial growth factor-B gene deletion has been shown to diminish blood vessel survival in an in vivo oxygen-induced vessel regression model of mouse corneal pockets.18,20 It has been proposed as an important survival factor for a variety of cell types under pathologic circumstances.25 Also, myocardial infarction models indicate that VEGF-B treatment induces expansion of coronary vasculature and epicardial arterialization.11,15,19 Such results suggest that VEGF-B protects coronary vasculature in pathologic circumstances. Vascular endothelial growth factor-B also functions as a survival factor for vascular endothelial cells, pericytes, and smooth muscle cells in vitro.18,20 However, myocardial perfusion was impaired in the VEGF-B transgenic hearts after transplant and reperfusion. Although VEGF-B can have a protective role in acute myocardial infarct models,11,19 this was not the case in the heart transplant model.

Transgenic overexpression of VEGF-B has been shown to lead to mild cardiac hypertrophy without progression to cardiomyopathy.11,15 Although there was no statistically significant difference in the cardiac graft dimensions between the transgenic- and wild-type groups in the present study, the individual cardiomyocyte area was greater in the transgenic hearts than in the wild-type hearts. Despite the suggested involvement of VEGF-B in lipid transport from the circulation to the heart, there were no differences in the amount of intracellular lipid droplets within cardiomyocytes. The amount of extracellular ATPase CD39 was increased in VEGF-B-overexpressing hearts, suggesting a boosted ATP production.28 Kivelä and associates have shown that transgenic cardiac human VEGF-B overexpression promotes aerobic oxidative metabolism in cardio­myocytes.29 Furthermore, we have previously described how endogenous VEGF-B mRNA levels diminish along with cardiomyocyte size in cardiac allografts during long-term follow-up and unloading of the grafts.30 Combining this information with our current findings, one could hypothesize that VEGF-B may be an important factor in the maintenance of cardiomyocyte metabolic homeostasis and adap­tation to increased workload, overexpression of which leads to cardiomyocyte hypertrophy. Moreover, this translates into increased VEGF-B mRNA expression during ischemia, as the cardiac tissue is striving to overcome the lack of nutrients.

The increased myocardial damage in transgenic cardiac grafts could be explained by their higher ATP production and thus basal metabolic demand as a result of continuous high levels of VEGF-B, leading to decreased ischemia tolerance. Also, the RNA encoding cytochrome C oxidase, a component of the electron transport chain, was increased in the VEGF-B overexpressing hearts, suggesting an impaired metabolic switch from fatty acid oxidation and oxidative phosphorylation to anaerobic glycolysis during ischemic preservation of the graft. The transgenic overexpression of VEGF-B resulted in significant cardiomyocyte hypertrophy, which was the most likely cause of the increased recipient serum troponin T concentration and decreased myocardial perfusion rate. These results, however, were not mimicked after AAV9-mediated short-term VEGF-B overexpression in heart transplants, indicating that long-term VEGF-B overexpression is needed for cardiomyocyte hypertrophy.

Overexpression of AAV9-mediated VEGF-B in heart transplants was associated with a mild increase of cardiac ED-1-positive macrophages. Furthermore, of the various cytokines analyzed, IL-12 p35 mRNA expression was increased in the VEGF-B-treated heart transplants, suggesting a proinflammatory macrophage phenotype. VEGFR-1 is expressed on the surface of monocytes and macrophages and regulates the migration of these cells.31,32 To our knowledge, however, there are no previous reports on VEGF-B acting directly on macrophages. Instead, VEGF-A has been shown to induce macrophage migration and activation via VEGFR-1.32 Furthermore, VEGFR-2 signaling has been shown to increase cardiac allograft inflammation.33 A study conducted by Kivelä and associates showed that increased cardiac VEGF-B expression made more VEGF-A available for VEGFR-2 signaling, offering a possible explanation for our findings.29

Here, for the first time, we demonstrate that VEGF-B is upregulated by ischemia-reperfusion of heart transplants. An excess of VEGF-B, however, did not protect heart transplants from heart transplant-associated IRI. The cardiomyocyte damage that we observed after long-term human VEGF-B overex­pression may have been caused by a faulty switch from oxidative phosphorylation to anaerobic meta­bolism during the ischemic period and by the cardiomyocyte hypertrophy, exacerbating ischemia. 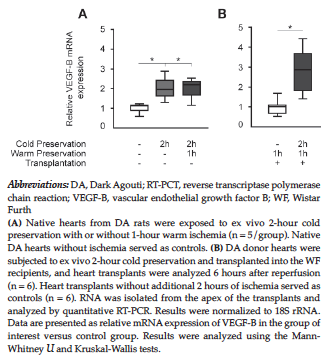 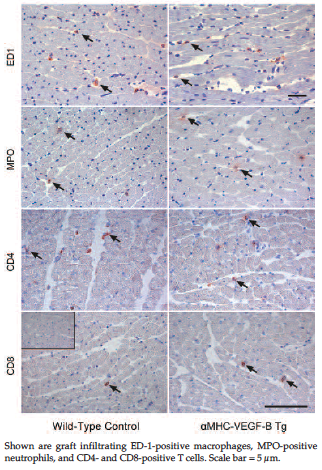 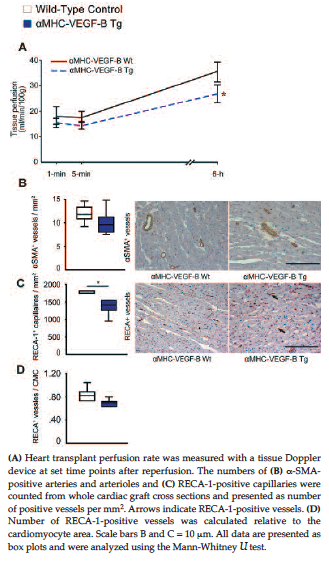 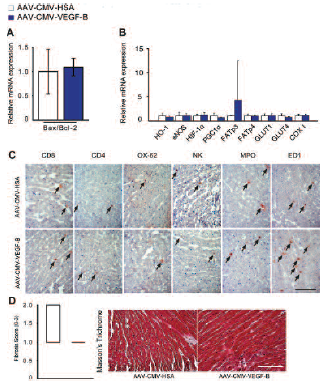 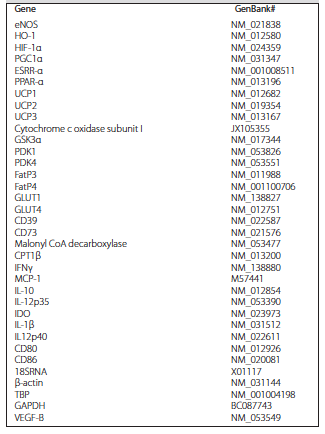 Table 1. Genes Along With Their Respective Gene Bank Numbers Investigated in Our Study