Conclusions: Although renal transplant patients with associated amyloidosis-type familial Mediterranean fever and those with glomerulonephritis have similar rejection and/or graft loss rates, hospital admissions due to infection and increased mortality are more common in the familial Mediterranean fever group, with immunosup­pression drug withdrawal or switch­ing due to infection more often required.

Familial Mediterranean fever (FMF) is an auto­inflammatory disease with autosomal recessive transition, principally affecting people with Mediterranean heritage. An ongoing subclinical inflammation and associated amyloidosis (AA type) are the most important complications of FMF.1,2 Amyloidosis most commonly involves the kidney, and the gradually developing renal failure is associated with poor outcomes.1-3

Kidney transplant is an important option for patients with FMF-AA-induced end-stage renal disease. In these patients, posttransplant lethal infections and recurrence of amyloidosis with cardiac involvement are serious complications.4,5 The pathogenesis of infections in renal transplant patients with FMF is not known exactly. However, it is postulated that mutations in the Mediterranean fever MEFV gene, by simultaneously reducing the ability of pyrin to control interleukin 1β activation, may lead to inflammation.6-8 So far, no studies in the literature have focused on infections after renal transplant and associated immunosuppressive drug regimens in FMF patients.

The aim of this study was to investigate the frequency of infections requiring hospitalization together with the associated immunosuppressive drug protocols and to evaluate long-term graft and patient survival in renal transplant recipients with FMF.

Medical records of patients (from June 1999 to June 2015) with FMF-AA who received a kidney transplant at our center and who had at least 1-year follow-up after transplant were analyzed retrospectively. Kidney transplant recipients with primary glomerulonephritis and with similar demographics, immunologic profile, and follow-up constituted the control group. The definition and categorization of infections were based on the US Centers for Disease Control/National Healthcare Safety Network Surveillance Definitions for Specific Types of Infections.9

Statistical analyses were performed with SPSS software for Windows (SPSS: An IBM Company, version 15.0, IBM Corporation, Armonk, NY, USA). Means and standard deviations of all values were calculated. Mean values of the 2 groups were compared by t test or by a nonparametric test if the data were not normally distributed. P < .05 was considered statistically significant.

The study group included 32 patients with FMF and the control group consisted of 25 kidney transplant patients with primary glomerulonephritis.

Of the study patients, 87% of those with FMF and 84% of control patients received induction therapy with rabbit antithymocyte globulin (P = .74). The maintenance immunosuppression therapy for all patients in both groups was a triple drug regimen. The number of patients who received calcineurin inhibitor or mammalian target of rapamycin inhibitor-based triple immunosuppression therapy was 25 versus 7 in the FMF group and 18 versus 7 (P = .60) in the control group. The choice of antiproliferative agent was azathioprine for 8 patients (25%) with FMF and for 6 patients (24%) in the control group. The remaining patients in both groups received either mycophenolate mofetil or mycophenolic acid.

Although all of the patients in both groups initially received a triple immunosuppressive regimen, percentages of patients who continued this protocol at 1 and 3 years posttransplant were at 81% and 56% in the FMF group and 88% and 79% in the control group (P = .27, P = .09).

In this study, increased hospitalization rates due to infections and the importance of associated com­pli­cations were reported in kidney transplant recipients with FMF-AA. Indeed, within the average 7-year follow-up, the rate of hospitalization due to infection progressively increased to 81% in patients with FMF but remained at 52% in the control group (P = .02). More importantly, neither significant modifications in the applied doses of the immunosuppressive drugs nor immunosuppresive drug withdrawal at 1 and 3 years posttransplant caused reductions in the incidence of infections. Although not statistically significant, the infection episodes in our series resulted with increased mortality in the FMF group (18.7% vs 8%). In the literature, there are many studies with different primary outcome measures that have identified infection as the most important cause of death after transplant in patients with FMF. In 3 different studies, severe sepsis was responsible for 60% to 100% of all deaths with a functioning graft in kidney recipients with FMF or systemic amyloidosis.10-12 In addition, as also shown in our study, in some series infection-related deaths were frequently observed late after transplant, indicating the effects of long-term exposure to immuno­suppression rather than intense immunosuppression during the early phase posttransplant.12,13

In Turkey, kidney transplant procedures for the treatment of end-stage renal failure due to FMF-AA began in 1985.14 Investigations about the best treatment modality in FMF-AA patients revealed the superiority of kidney transplant to hemodialysis, and this has increased the number of organ transplants in the subsequent years. In addition, even patients with amyloid recurrence after transplant had better long-term survival rates than patients who continued hemodialysis.10 In many studies, graft and patient survival rates at 1, 5, and 10 years after transplant were similar in patients with FMF and other end-stage kidney disease causes, and graft outcome rates at 1 and 10 years have been reported as over 90% and 70% in all series without exception.4,11-13,15 In our series, within the average 7-year follow-up, graft survival (censored for death) was over 90%.

From the 1Department of Nephrology, the 2Department of General Surgery, and the 3Department of Biochemistry, Izmir Bozyaka Education and Research Hospital, Izmir, Turkey
Acknowledgements: This study was not funded by any company, and the authors declare no conflicts of interest.
Corresponding author: Erhan Tatar, Izmir Bozyaka Education and Research Hospital, Division of Nephrology, 9035170, Karabaglar, Izmir, Turkey
Phone: +90 232 250 5050
E-mail: etatar@hotmail.com 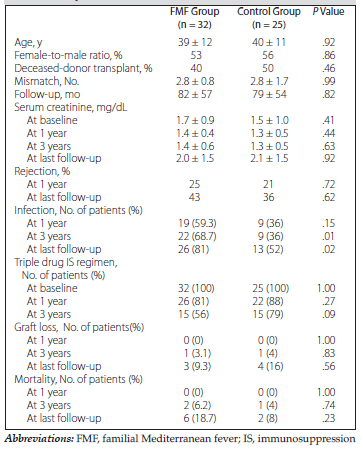